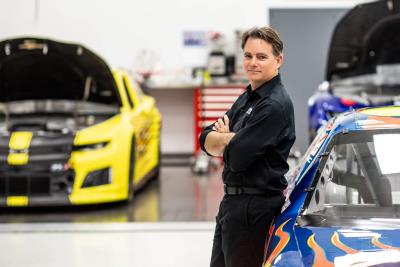 Hagerty announced today that NASCAR Hall of Famer and Vice Chairman of Hendrick Motorsports, Jeff Gordon, will serve as Honoree of The Amelia on March 2-5, 2023. The weekend’s events will include a lively seminar on Saturday featuring Gordon and NASCAR Hall of Fame crew chief Ray Evernham as well as opportunities to meet the legendary driver at Sunday’s concours that will showcase a class of vehicles he drove and won in during his career. Tickets for the 28th annual event are available at AmeliaConcours.com.

‘Jeff embodies the spirit of The Amelia, often referred to as ‘the racer’s concours,” said McKeel Hagerty, CEO of Hagerty. ‘His incredible success on the track has made him a household name, but Jeff is more than a legendary driver. His charitable heart is on display at Jeff Gordon Children’s Foundation, where he has led the battle to find a cure for childhood cancer for more than two decades.’

Gordon joins a long line of racing royalty honorees including Sir Stirling Moss (1996 & 2015), Richard Petty (2010), Roger Penske (2020) and Chip Ganassi (2022). Gordon’s former crew chief, Ray Evernham, is an Amelia regular. This year he will lead a discussion on Gordon’s incredible career at Saturday’s seminar ‘Jeff Gordon: The Hendrick Motorsports Years.’ It’s an invitation to relive a few of the duo’s greatest moments.
‘Ray and I have talked about me attending The Amelia for years,’ Gordon said. ‘It’s an honor to be recognized at such an incredible event that blends car culture, car enthusiasts, beautiful cars and high-performance vehicles. And for us to be able to showcase cars that have been such a huge part of my career will make the weekend that much more memorable for me.’

Gordon was one of the most versatile drivers of his era and is credited with helping take NASCAR mainstream in the 1990s. He changed the face of the sport by breaking stereotypes and drawing legions of new fans with his talent, poise and approachability. From November 1992 through November 2015, Gordon drove for Hendrick Motorsports, winning four NASCAR Cup Series championships (’95, ’97, ’98 and ’01), 93 races and 81 pole positions while scoring 325 top-five finishes and 475 top-10s. With his first title in 1995, he became the youngest champion in NASCAR’s modern era.
Gordon is NASCAR’s winningest driver on road courses (nine wins) and restrictor-plate tracks (12). In January 2017, he became the first NASCAR Cup Series champion to win overall at the 24 Hours of DAYTONA joining A.J. Foyt, Mario Andretti and Jamie McMurray as the only drivers to win the prestigious sports car race and the DAYTONA 500. In February 2019, Gordon was inducted into the NASCAR Hall of Fame.

From 2016 to 2021, Gordon served as a race analyst for FOX Sports and contributed to the network’s prerace coverage. In addition, he was able to make the cross-over to wider public appeal, being the only auto racing driver to host ‘Saturday Night Live,’ and co-host ‘Live! With Regis and Kelly.’ He also appeared on the big screen in ‘Taxi,’ ‘Herbie: Fully Loaded’ and ‘Looney Tunes: Back in Action’ and voiced the character ‘Jeff Gorvette’ in the animated films ‘Cars 2’ and ‘Cars 3.’

Gordon established the Jeff Gordon Children’s Foundation in 1999, which supports pediatric cancer research and treatment and has granted more than $22 million to support children battling cancer.

Adding to a week of thrilling cars, Hagerty has named Broad Arrow Auctions as the host of the official auction of The Amelia. Set for March 4, 2023 at The Ritz-Carlton, Amelia Island, Broad Arrow’s inaugural Amelia auction will feature exceptional collector cars ranging from pre-War American classics to modern supercars. Collectors interested in consigning their car(s) to this world-class event are invited to contact a Broad Arrow specialist via broadarrowauctions.com.

About The Amelia
Now in its 28th year, The Amelia is a multiple award-winning motoring event held March 2-5, 2023 at The Golf Club of Amelia Island and The Ritz-Carlton, Amelia Island. Broad Arrow The Amelia Auction, luxury shopping, new vehicle reveals & experiential drives, exclusive gatherings and entertaining seminars surround Saturday’s Cars & Community and Sunday’s Concours d’Elegance. Each year The Amelia honors a racing legend and attracts celebrities from across the automotive landscape. The Amelia has donated over $4 million to deserving non-profit and charitable organizations.

About Hagerty, Inc. (NYSE: HGTY)
Based in Traverse City, Michigan, Hagerty’s purpose is to save driving and car culture for future generations and its mission is to build a global business to fund that purpose. Hagerty is an automotive enthusiast brand offering integrated membership products and programs as well as a specialty insurance provider focused on the global automotive enthusiast market. Hagerty is home to Hagerty Drivers Club®, Hagerty Drivers Club magazine, Hagerty Drivers Foundation, Hagerty DriveShare™, Hagerty Valuation Tools®, Hagerty Media, MotorsportReg, Hagerty Garage + Social®, The Amelia, the Detroit Concours d’Elegance, the Greenwich Concours d’Elegance, the California Mille, Motorlux, RADwood, Broad Arrow Group and more. For more information on Hagerty please visit www.hagerty.com, or connect with us on Facebook, Instagram and Twitter.

Wed Nov 16 , 2022
The once-a-year Concours SA has returned just after a temporary hiatus. The 2022 Concours South Africa celebration is set to just take location at Broadacres Centre in Fourways Johannesburg on November 20. The ideal element of this year’s event is that entry is totally free for the community. Follow Double […]